For many, the holy Islamic fasting month of Ramadan is a time to recognise the hardships faced by those less fortunate than ourselves and to engage in volunteer service to help out.

It is this spirit of sadaqah that has driven the Malay Youth Literary Association- better known as 4PM, an abbreviation of its Malay-language name, Persatuan Persuratan Pemuda Pemudi Melayu – to organise Ramadhan-on-Wheels (ROW) to distribute assistance to low-income families and treat them to a day out.

This year — on Saturday 11 August 2012, during the last week before Hari Raya – more than 1000 volunteers and 270 low-income families will come together at ITE East in Simei and visit a local grocery store to stock up on provisions for this annual celebration.

Since 2001, more than 1700 families have benefited from the programme.

“It’s not just about giving (the beneficiaries) a voucher, but treating them to a day out,” says 4PM case manager Evina Suban.  “They are like a V.I.P. for a day.” 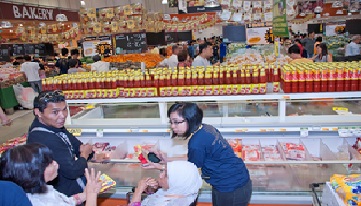 Volunteers assist with the shopping

This is the second year that Richard, an 82 year old beneficiary, will receive shopping vouchers from 4PM.  He appreciates the time that volunteers take to drive him to and from the market, particularly since his wife must often stay at home due to ill health.

In addition to food vouchers, ROW provides assistance in other ways as well. Each year is different.  In the past, 4PM has distributed computers and baju kurungs, new clothes for the Hari Raya celebrations.  This year, ROW volunteers have helped clean beneficiary homes and provide them with a fresh coat of paint.

In its early days, 4PM volunteers used to row sampans to Singapore’s outlying islands to assist those in need during Ramadan.

But that was back before Singapore became independent — 4PM was founded in 1948 — at a time when most people here still lived in kampongs.

ROW, which is now in its 12th year, is rooted though in those early ideals.  At first, volunteers delivered groceries to the beneficiaries.  However, over the years the ROW committee realized they could do more.

“We used to give in the form of groceries,” says Evina.  “But we realised different people have varying needs (depending on their age and health status).”  In 2009, ROW replaced the groceries with vouchers.

While 4PM’s roots are in the Malay community, it assists families across Singapore, regardless of ethnicity or religion.  Currently about 30-40% of 4PM’s beneficiaries are non-Malay. 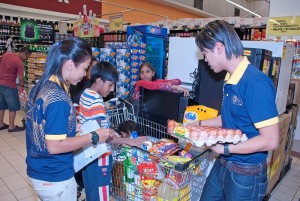 Each year, volunteers say they gain as much from the outing as the beneficiaries.

Take the example of Nadya Hasheem, a third year volunteer who was initially a committee member.  During a home make-over, she was touched by the experience of an elderly couple who lost their home due to their children’s spending.  The couple never blamed their children.

“It made me realize the lengths of sacrifice parents will go for their children and how they can still love with no bitterness, and only goodwill,” says Nadya.  “I am honoured to serve them.”

And when she heard that this was the first time someone has offered to help the aunty, Nadya says she learned an even more important lesson: “appreciate even a small simple gesture, for all we had done was clean and paint the house for them.”

Volunteering for ROW “is a humbling experience and working with a diverse team of volunteers is very rewarding,” adds 2012 ROW chairman Syed Faisal, who looks forward to making all the participants feel like a VIP-for-a-day.

You can still join the celebrations – and break the daily fast with the Muslim participants – at ITE East on Saturday 11 August.  In the morning, volunteers pick up the beneficiaries and bring them to ITE East, the festival venue.  At 2pm, the guest of honour, Minister for National Development Khaw Boon Wan, will present the beneficiaries with the vouchers.  Around 4pm, volunteers will drive the families to the Giant supermarket in Tampines to go shopping. And then finally there will be an iftar break-fast back at ITE after sunset.  While at ITE East, please visit the ONE (SINGAPORE) booth.

At the event, visitors can also make donations to 4PM.

Corporations or groups of individuals who are interested in supporting 4PM’s student assistance and mentoring programmes, please contact ONE (SINGAPORE) to ask about our Corporate Adoption Programme.

This article was edited by Rica Facundo and Michael Switow.